Created by Australian Survivor All-Stars, Lee Carseldine and winner David Genat after Lee lost his mother to a stroke on the show in 2019. The Towel Challenge was launched in March 2020 in the middle of COVID and still raised $50K and reached more than 4.2 million Australians in awareness last year for the Stroke Foundation. In 2021 the calendar was produced again and involved celebrities such as Sophie Monk , Hugh Sheridana nd Olympians Danielle Scott and Emily Seebohm

For their effort, Lee and David was awarded Stroke Foundation’s Fundraiser of the Year Award in 2021.

Lee also guest speaks for the Stroke Foundation at many functions raising awareness for the illness and stroke survivors. 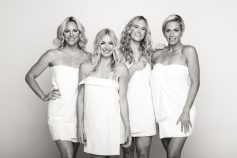